I lost my first Grandparent, my Dad's father, when I was in the third grade. It was a devastating experience in many ways. I'd never been exposed to death or dying before that. It was very difficult to see my family, a very jovial bunch of people, deeply grieving. The funeral itself was a nightmare, as all the family members except my brother and I sat in a separate section to the side, evidently to provide some privacy. My brother and I sat in the back of the packed church with my Mom's parents, where we cried and wailed, both for the loss of our grandfather and the unexplained (to our satisfaction) separation from our parents.

When Nathan started third grade this year, I unexpectedly spent the day on the verge of tears. On the surface, it was an absolutely ridiculous reaction. Third grade is hardly a milestone year. But I couldn't shake the deep sorrow that enveloped me. The truth was that I was scared of history repeating itself and of my own son losing a grandparent at the same age I did. I finally called my Dad in tears, hardly able to express why I was so upset. We cried together on the phone for an hour as I asked him to tell me everything he could about my Grandpa. What did his hands look like? What did he sound like when he laughed? What made him happy or angry? My memory of him is nearly blank, and that made me grieve even harder when I thought of my own kids. If they lost their grandparents right now, would they have any memory of them when they are older?

Earlier in the year my Dad's sister arranged a family reunion. It was held at a park, noisy with activity. I was very late due to previous plans I couldn't get out of. Most everything had been put away, including the giant boards plastered in family photos. My cousin kindly pulled them out for me to look at. I immediately saw a black and white photo of me and my little brother standing on either side of my Grandfather, a long table behind us set up for Thanksgiving or Christmas dinner. It took all my strength to not rip the photo off the board and stuff it in my pocket to save forever so that I could have some small token of proof that we were together. Instead, I've been pestering my Aunt Barbara all year to send me a copy of the photo. It arrived this morning. 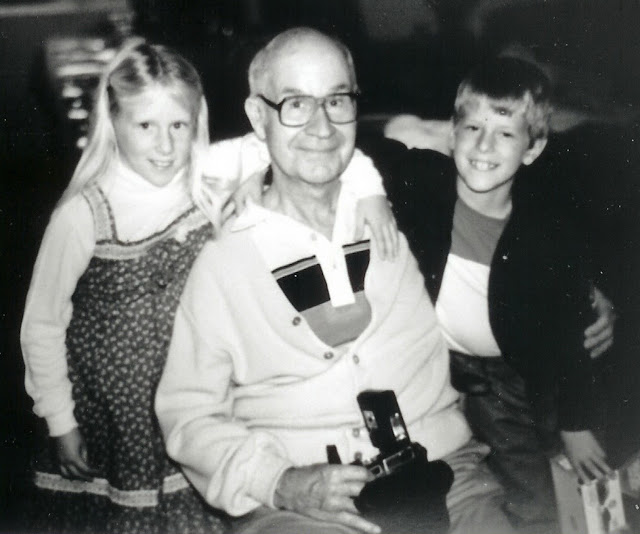 There's no secret to the fact that of all the places in Los Angeles we could have called home, we moved a block away from Michael's parents. And although my parents live about five hours away, I make sure the kids see them at least every other month. We tend to give our children the things we didn't have growing up. For me, that is giving Nathan and Benjamin every possible opportunity to get to know their Grandparents. Not just on holidays when everyone is dressed up and on their best behavior, but as part of everyday life. When they are my age, I want my parents and Michael's parents to be part of the rotating cast of characters that fill up their childhood memories. I know that almost every single time my kids are with their Grandparents, I pull out the camera and get a picture to go with the hundreds of other photos of them with their Grandmas and Grandpas through the years. I wonder if when they have children of their own, they’ll work this hard to make sure Michael and I are part of their lives. I certainly hope so. I'll make it easy on them, meet them at least halfway.
By Heather Rose-Chase at June 17, 2010