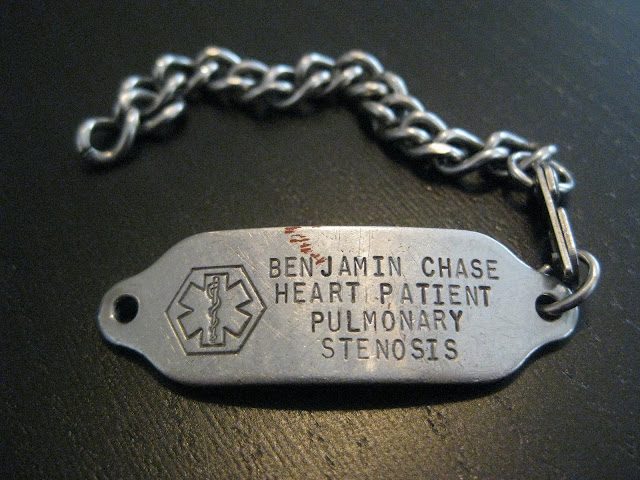 My son Benjamin was born with Pulmonary Stenosis, a type of congenital heart disease. The pulmonary valve that pumps blood to the lungs was closed when he was born. There was just a pin-prick hole in the valve that allowed the blood to push through. His tiny heart had to work much harder than it was designed to, and within hours of his birth there were already signs that his heart was struggling. He had heart surgery when he was four days old to open up the valve. From the time he was one month old, he's worn the medical bracelet in the photo above. We've never taken it off for any reason. Last week he came home quite agitated and pulled me into his bedroom and held up his wrist. It took me a moment to realize what he was showing me... naked skin without a bracelet. I asked what happened and he handed me the broken bracelet, covered in seven years worth of dents and scratches. Through tears he told me he didn't know, it just broke.

His bracelet is like the little engraved plaque next to a work of art, a way to identify and classify. Of course it's more than that. It's also a way to let medical personnel know what steps to take in an emergency. And considering Benjamin has worn it for just shy of seven years, I can understand why he was so broken up about it breaking. I was a little broken up myself! When we brought Ben home from the NICU after surgery, there wasn't a minute that didn't go by without me thinking of his heart. It consumed my life. He had daily appointments with the cardiologist. After awhile, the daily appointments became weekly appointments. When he was eight months old, they became monthly appointments. And then they became quarterly, soon followed by every six months. Now we see his pediatric cardiologist just once a year. Throughout the last seven years, I've gone from thinking about his heart constantly to actually having weeks and months go by without it being the number one thing occupying my thoughts. I never dreamt that would be possible when I first brought our baby home, newly minted with the title of Medically Fragile Child and his accompanying stack of appointment cards and prescriptions. As we get closer to Ben's birthday and his annual appointment with the pediatric cardiologist, I've noticed my thoughts are constantly coming back to his heart. Seeing the broken bracelet and Ben asking me each day if his new one arrived certainly doesn't help. Our last few visits with the cardiologist haven’t been overflowing with great news. As he grows, the muscles of his heart are thickening as they work extra hard to push blood through his pulmonary valve. Thanks to the surgery, the valve now lacks a way to make a perfect seal after each heartbeat, allowing some blood to rush backwards. I’m eternally hopeful that the next appointment will be the one where the measurements show no change from the previous year.

Life is so short. The days seem long and never ending, but I'm shocked that Benjamin has already been with us for seven years. The silver lining in the ominous cloud of Ben's heart is my reminder to take advantage of the time I do have. To tell my family and friends I love them, and not become casual or complacent with the gift of waking up every morning. I’m not a morning person, so that doesn’t come easy for me! But you get the idea. We have a finite number of days to make a difference in the world. Although it happens, no one is actually promised that they’ll live into ripe old age and die peacefully in their sleep. Makes me wonder how we might live differently if we knew things would all end next week, or even tomorrow. Right now I gotta go check if the new bracelet has arrived and then pick the kids up from school. They’re done with homework for the year, so maybe we’ll celebrate with a quick trip for ice cream. Because if today was my last day, I’d want to spend it celebrating. How about you?
By Heather Rose-Chase at June 15, 2010

Email ThisBlogThis!Share to TwitterShare to FacebookShare to Pinterest
Labels: Benjamin, growing up