The world is a book and those who do not travel read only one page. - St. Augustine 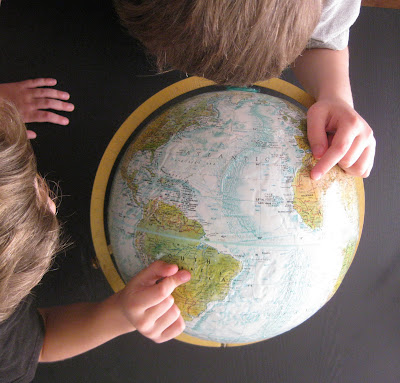 For my part, I travel not to go anywhere, but to go. I travel for travel’s sake. The great affair is to move. - Robert Louis Stevenson

We renewed the boys' passports this month. It will be Nathan's third passport and Benjamin's second. I can't tell which is stronger: the sorrow over a cancelled passport that was filled with stamps and visas from all over the world, or the excitement over a fresh, clean passport filled with blank pages, ready to be used up.

I went to a party last night, and brought home (of all things) this globe. I spin it around and it makes me want to pack my bags and go... somewhere. At the party I met a woman who bought airfare to Spain on a whim. As the date of her departure nears, she is fretting a bit over this rash act. I spent half an hour talking to her and telling her about my experiences in Spain, and travel in general. How even the worst travel experiences (and boy, we've had a few) shape us and strengthen us and teach us more about ourselves than years of analysis ever could.

Last night I tossed and turned restlessly. In three months, we'll have been in this house for four years. The last time I stayed in any one place for four years was high school. And once I had my diploma in hand, I shot out of town as fast as my little red truck would take me.

The kids had a great time looking at the globe, trying to find all the places we've lived and visited. My favorite comment was when Nathan gave it a spin and said the world was a little bit bigger than he thought, and we still had quite a few places to see if we want to see it all. He's a boy after my own heart. Better get a move on, huh?
By Heather Rose-Chase at February 22, 2010