In college I had a brief stint as a political activist. I went around, registering people to vote and persuading them to sign a petition for reform in the auto insurance industry. I wasn’t a complete failure at it, as I did return quite a few signatures and voter registration forms, getting paid for each one. My weakness was getting into conversations with the people instead of just getting them to sign on the dotted line then moving to the next person. Most of my conversations revolved around things like civic duty and the fact that in America we can actually change laws and bring about change through petitions and the political process. It wasn't enough that I got their signature, I wanted everyone to grasp the broader meaning behind what they were signing. When my resulting paycheck was about a quarter of that of my coworkers who had worked the same number of hours as I, it was time to hang up my clipboard for good and move on to a different job.


Flash forward 16 or so years, and I find myself living in the same neighborhood my husband grew up in. My children attend the same elementary school he did, walk the same route to school that he and his siblings did, so long ago. The population of the school itself has swelled 400% since their day, which means there are more pedestrians, more bikes, more cars, and less places to park near the school. We live close enough that driving would be a silly choice, so we walk. Michael frequently drops the kids off in the car on his way to work, but they know that unless I'm really sick, we're walking home. Even in the pouring rain.

There is a single street we have to cross which has a crosswalk, but no stop sign. Over the last four years that I've been walking the kids to school, I have been very nearly hit in that crosswalk four times. Drivers have zoomed through the intersection while I'm right in the middle of the crosswalk, leaving me to jump forward or backward, yanking the kids to safety. And I wish I could say that these drivers were people unfamiliar with our residential neighborhood. But the sad truth is that every single time it's been a minivan or SUV filled with kids and car seats whose kids attend the same school as my kids. They should know better.

I was far from the only person in the neighborhood who experienced these near misses, and finally one of the parents on our block started a campaign to get a stop sign put in at the intersection. I enthusiastically jumped in, sending letters to our local traffic commission, signing petitions, and documenting my experiences. There was an initial meeting with the commission, followed by a letter going out to every house in the neighborhood informing them of a traffic commission meeting that would be dedicated to this issue.

The day of the meeting came, along with a huge rain storm. In homage to my college days of political activism, I pulled on my big black steel-toed boots and went down to city hall. The traffic commission members expressed amazement that there were so many people, standing room only, especially since the weather was so cold and rainy. We were told we would have a chance to speak, but would be limited to just three minutes each. I came prepared to speak, and jumped in front of the microphone.

Here's the thing... you know how they say the number one fear, even ahead of death, is public speaking? I have no such fear. In fact, there are few things in life I enjoy more than getting up in front of a crowd and sharing my thoughts. I get paid to do it at least a couple of times each year. I wish I could do it more. And standing behind the podium, addressing the seven men up on the platform, I was filled with confidence and the exact words I wanted to say to convince them to put in a stop sign. But an unexpected thing happened. As soon as I started talking about my children, our neighborhood, my experiences in the crosswalk, I literally choked up. The more you try not to cry, the harder it is to stop. So I just took deep breaths and did my best to get my point across - that my boys, at ages 9 and 6, are still not allowed to cross the street without holding my hand. That the most recent time we were nearly hit, I left a mark on Ben's arm where I pulled him out of the path of a speeding, minivan driving mother who would not have seen us until after she hit us. That stop signs don't always solve the problem, but if a stop sign at that intersection could help prevent even a single tragedy, it was worth every cent it would cost the city to put it in. Tears on my cheeks, I implored them to not wait while this toiled through the typical bureaucracy necessary to move forward on taking action. I looked every single man right in the eyes, pleading with them to do something. I went back to my seat, shocked at how overcome with emotion I'd become. There were dozens of speakers after me, all saying they too would be in favor of a stop sign. After all the speakers, the commission said they would do everything they could to get this done. They took a break before discussing unrelated matters, and most of the crowd left. My mother- and father-in-law, who also live in this neighborhood, happened to be there and came up to me afterwards and told me I did a good job. Aw, shucks, just doing my job as a mother.

And then we waited. Nine days later I heard what sounded like a street sweeper on the next street over. It sounded like it just kept going up and down the block. Weird, I thought. That afternoon, I went to pick up the boys from school, and do you know what I saw? 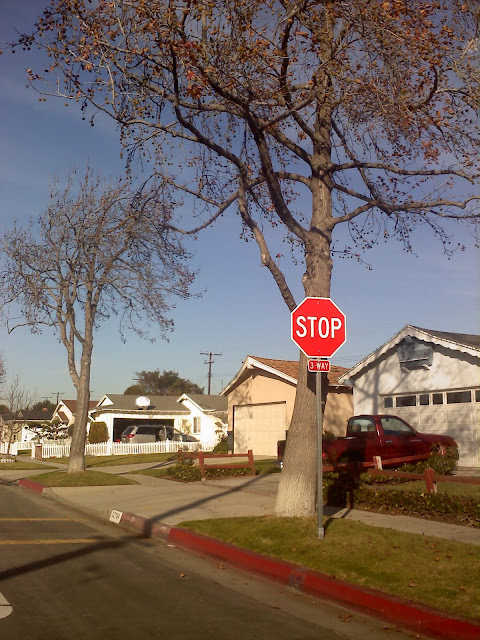 Our brand new stop sign! It's beautiful isn't it? The street sweeper sound was actually the sand blaster removing the word SLOW from the asphalt, and putting in the word STOP. All the other Mommies in the neighborhood were just giddy with excitement, walking tall with pride. I took the photo above, and texted it to everyone I knew, sharing our accomplishment. I sent a personal, handwritten thank you card to every single one of the traffic commission members, thanking them for their swift action and obvious commitment to the safety of the children in this neighborhood. I grinned like the Cheshire Cat every time we crossed in the crosswalk as the cars pulled to a complete stop to let us cross. The boys were wide-eyed with wonder at the fruit of a real life example of working hard to get what you want, what you need. It's just a stop sign, but man, it felt good!

Maybe my days of political activism aren't over just yet. Perhaps I simply need to focus on what I do best - speaking with people about the things I'm passionate about. Just last week we got an email from our school district stating that state funding for Art, Music, and the GATE Program had been scaled back to unsustainable levels, and that these programs were going to make a hasty exit from the few remaining schools that actually offer them. Hmmm. That won't do. Sounds like I need to pull on those steel-toed boots and get talking to people!
By Heather Rose-Chase at February 18, 2010