2010 marks the 100th anniversary of the Boy Scouts of America. To celebrate the occasion, the Boy Scouts entered a float in the Pasadena Tournament of Roses Parade. Rose Parade floats have to be covered in 100% natural plant items, like flowers, seeds, spices, or bark. Part of the Boy Scout float design included small replicas of each of the 120 merit badges that are possible for a Scout to earn. These were made into shields that were to be carried by 120 Eagle Scouts walking in the parade in front of the float. They enlisted Cub Scouts and Boy Scouts from the Los Angeles area to come help decorate these shields. It was a big deal to be invited, as normally they don't let anyone under 12 in the big float decorating warehouses. We enthusiastically volunteered, even though it meant getting up at 5:00 a.m. on a Saturday and working for two hours in a freezing cold warehouse. After all, working on a Rose Parade float is a rite of passage for Southern Californians!

Each Scout had to be paired up with an adult. I was with our oldest son Nathan, and Michael was with Benjamin. Nathan and I got the Mammal Merit Badge, and Michael and Ben got the Amphibian and Reptile Merit Badge. A man from the professional float company would come around and shout off a list of what seeds, spices, or flowers we needed, quickly pointing out what area each item should be placed where. It was a little confusing, and I kept repeating over and over exactly what he said. The world of flowers and seeds is quite foreign to me. We had to use plain white glue to paint on the shield and then sprinkle the seeds on or place them one by one with a pair of tweezers we wore around our necks on a string.

It was a bit stressful, because he was naming things we'd never heard of, with only a vague idea of what color they might be. The shield Nathan and I were working on featured a pale grey squirrel. He told us to use lettuce seed for the grey and onion seed for the black outline. We did the outline first, as instructed, and then went on a hunt for lettuce seed. Someone (not from the professional float company as I later discovered) had tried to be helpful and used a Sharpie to label the different seeds and spices. I found a container marked lettuce seed that contained very dark round seeds. It look suspiciously like the poppy seeds I’ve seen in my lemon/poppy seed muffin, but what do I know? I just do as I'm told. And the bucket was clearly labeled lettuce seed and I’ve never, to my knowledge, seen a lettuce seed before. And there was only one guy from the professional float company trying to manage 70 volunteers, all clamoring for his attention. So Nathan and I shrugged and dove in, hoping that perhaps the different textures of the seeds might read as different colors. It wasn't too long before our squirrel started to look more like a skunk than a squirrel. In the meantime, Michael and Benjamin were making amazing progress on their shield. It was stunning how beautiful theirs was turning out, while mine and Nathan’s was looking... less than beautiful. Quite horrible actually.

Nathan and I were plugging along, doing our best, when the professional float guy happened to walk past and caught a glimpse of our skunk. And he flipped out on us: That isn't lettuce seed, that is poppy seed! This is ruined! What am I going to do! I meekly held up the mismarked container that clearly said lettuce seed and he just put his hands to his face and made moaning noises: I'm going to have to think about this. I don't know what to do about this. It's obviously ruined.

I was feeling about an inch tall and quite miserable, not accustomed to messing up on something artistic and creative, and certainly not used to being yelled at! Nathan just looked up at me, biting his lip while his eyes grew huge and worried. The float pro took away our skunky squirrel and handed us a second shield which featured a gold bugle: You can't mess this up.

In the meantime, Michael and Benjamin had gathered a crowd around their amazing shield. I think that made me feel even worse (if possible)! I was really bummed out about the experience and tried to put a brave face on for Nathan's sake. After all, he is quite the artist, creating lots of small sculptural items using paper and fiber. I did not want him to walk away discouraged, especially as we had talked up the float building experience to make it seem like a once in a lifetime event. Which, when you think about it, it was.

We finally finished our two hour shift just as the next group of Boy Scout volunteers arrived. We were able to to walk through the rest of the giant warehouse and see all the other floats. It was amazing to see all the hundreds of volunteers that came together to cover each float with flowers. It reminds me of working in Theatre… you spend lots of time and money to create something that will be seen a few times and then ripped down and discarded. Sad if you stop to think about it, but wondrous for the people who get to see it in person and enjoy it! At least the Rose Parade is taped and viewed on TV by millions.

Here's a shot of Ben working on his shield and you can see our skunky squirrel at the top of the photo. 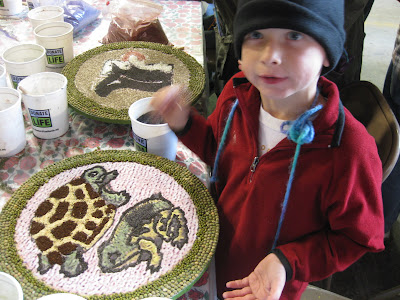 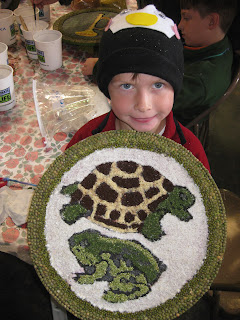 Buckets of seeds and spices. 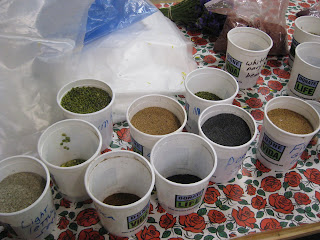 Here is the second shield that Nathan and I worked on. It represents the Bugling Merit Badge. It seemed impossible to mess up a simple bugle, right? Whew. We had layers and layers of clothes on to keep warm in the huge refrigerated warehouse. Brrrr! 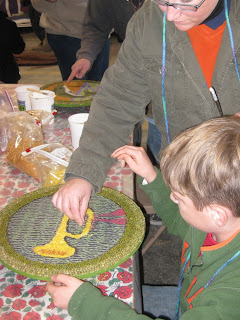 The back end of the Boy Scout Float. 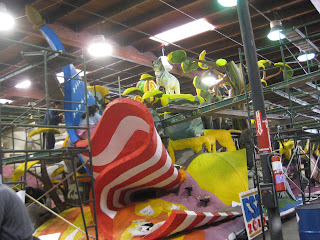 The boys in front of the float for the Boy Scouts of America. 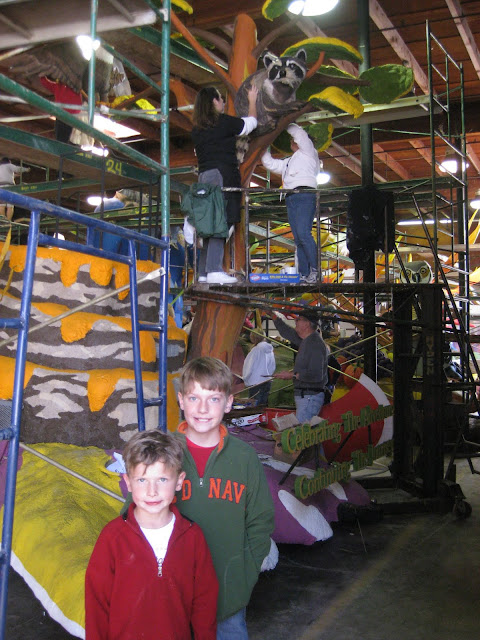 The Rose Bowl Stadium with the staging tents set up on the lawn. 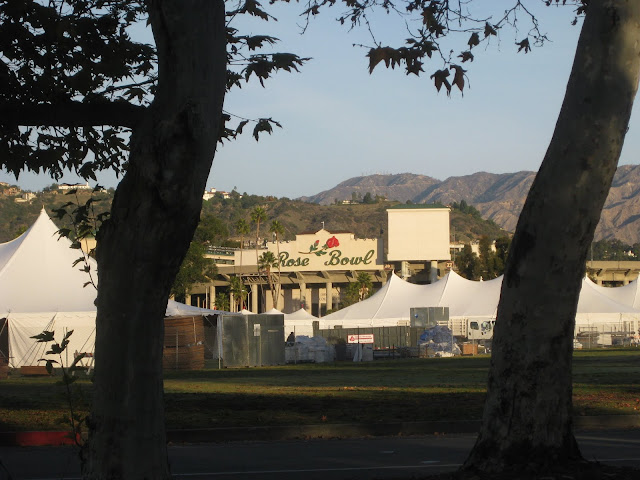