Our friend Amy throws a huge Christmas pajama party each year for our friends who have kids. Everyone dresses up in their pj's and brings a breakfast dish to share. This is a group who knows how to throw a potluck... so many yummy made-from-scratch items to choose from! I made a baked cinnamon and cream cheese french toast dish. Mmmm...
The nice thing about wearing your pj's to a party is that it's very comfy. You don't have to suck in your stomach or deal with achy feet in high heels. The unfortunate thing about wearing your pj's to a party is that no one above the age of 11 looks good in their jammies! We all look a bit like lumps! The kids had a blast though. We do a gift exchange for them and it's completely chaotic and so much fun to see 30 kids ripping into the gifts at the same time! Here are about two-thirds of the kids this year (they wouldn't all fit in one photo!). Last year it was a much smaller group, lots of new kids this year! 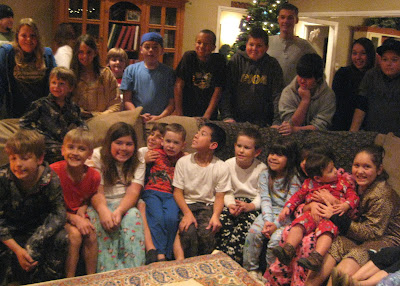 Here is my little family! It's the one party that Michael actually had space in his busy schedule to attend! Which is good, because don't you love the matching theme I've got going on here with all the red, white, and black? How many more years do you think I'll be able to get away with it? 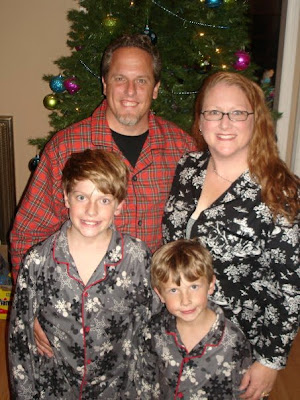 Last year Michael wore his actual pajamas, which were threadbare flannel pants and a raggedy tee. I knew better this year and snapped up a snazy red plaid pair well in advance of December. Poor guy. He's so busy and unaware of all the crazy things on the calender at home. He got home and I thrust a bag at him and said put these on. And he did, no questions asked. I love him so. 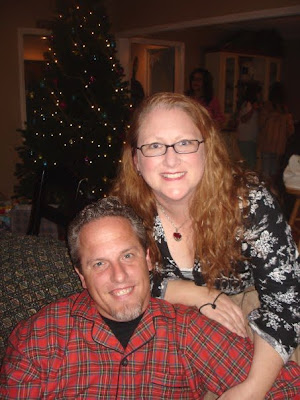 This is the party after the party. The group of people who love to sit and gab and laugh and have a good time and can't get enough of each other even when they see each other several times a week. You know the group... they're the ones who are still there after everyone else has gone home and the poor hostess is left with just the people who don't know that it's time to leave? I mean, normally when the hostess puts on her pajamas you know it's time to go. But in this case, we were all already in them. So when she started posting photos of the party on facebook, we decided it was time. 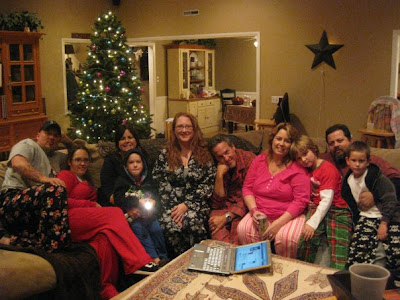 Don't tell anyone, but these are my favorite people anyway. And the nice thing is that we were all blessed with only boys. And all our boys love each other so much that we can actually sit and talk late into the night without them getting bored and begging to go home!
By Heather Rose-Chase at December 07, 2009