This is the time of year when every Friday and Saturday night and Sunday afternoon is filled to the brim with holiday parties and gift exchanges. It's exhausting!
First up, the Cub Scout Christmas Dinner. 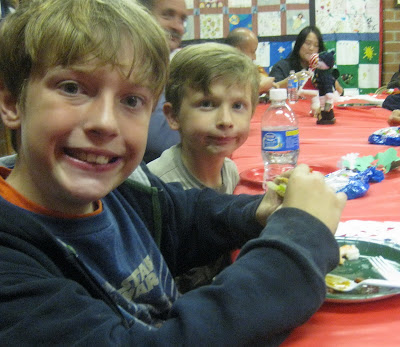 This party was a potluck, and I was on my own with the boys. Michael was stage managing a show, so I had to take the kids myself.

There was a huge miscommunication regarding one of the activities. At first, we were told that each boy would need to furnish a centerpiece for half a table. Then, we were told that each boy would need to bring some arts and crafts supplies and actually decorate the table, not just bring a centerpiece. So, being the arts and crafts maven that I am, I brought along a bunch of craft supplies and rolls of colored paper for the boys to make something with. Of course, when I walked through the door, each table already had a nice red table cloth on it and there were plenty of lovely centerpieces... Ugh! So, I made Nathan and Ben sit down and make a couple of paper snowflakes before they ran out the door to play in the courtyard. The kids got to play for about an hour and a half while the adults socialized. Of course, since Michael is the one who takes the boys to their meetings, I didn't know any of these adults. I felt awkward and tried to insert myself into their conversations, but it soon became apparent that these people have all known each other for many, many years, live next to each other, and even vacation together. So I sat and make nearly one hundred paper snowflakes, nodding and smiling when appropriate. I covered the table in them. Sometimes a few of the Cub Scouts would come inside and I'd show them how to make one and then they'd run off again. At the end of the night, they gave out a prize for the best centerpiece. Guess who won? Why, that would be yours truly, the Snowflake Queen.

Because it was a potluck, I made my favorite party recipe, baked beans that cook for hours that are highly addictive. I also made up a huge Cesar salad. I was a little surprised to find that everyone else had something delivered - pizza, fried chicken, a tray of pasta, store bought cake, etc. I always think that I'm the world's worst cook. I'm not, actually. People who eat my food can attest to that. I just really don't love to do it the way so many other people do. It's not my thing. I guess in my mind, a potluck means homemade food, not Domino's delivery. But it did give me the warm fuzzies to note that when I left, every last bean was gone and the salad was totally devoured. You couldn't say that about the pizza. And when a group of boys are involved, that's saying something!

Email ThisBlogThis!Share to TwitterShare to FacebookShare to Pinterest
Labels: Holidays