I grew up in Simi Valley, CA, in a neighborhood with a huge stone synagogue. Many families on my block were Jewish. It always seemed like we were the only ones without a menorah displayed prominently in the front window. For many years I actually thought I was Jewish too, and begged my neighborhood friends to teach me words in Hebrew. We participated in many Hanukkah, Passover, and Sabbath celebrations with our friends who were happy to have us there to join them. Fast forward 30+ years to this year, when six-year-old Benjamin went to the book fair at school and came home with his wish list of books. Every single book was about Hanukkah! I asked him why, and he told me confidently that it was because we celebrate Hanukkah. I told him that we didn't, but he was quite sure that we celebrate it every year. Of course, we do play with dreidels every year, but that is hardly celebrating Hanukkah. His enthusiasm, and matter of fact assertion that we do indeed celebrate it, didn't wane even slightly for an entire week. And so that is how we found ourselves pulling out a menorah, making latkes, and spinning dreidels on the first evening of Hanukkah. Ben was beyond thrilled, and took his responsibility of lighting candles and reciting blessings quite seriously each evening. 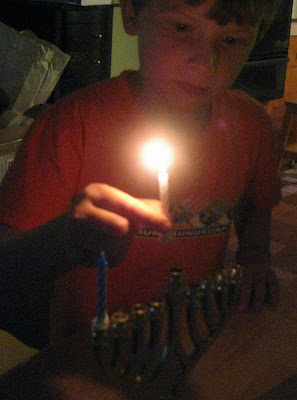 Nathan was pretty excited to find out that there were eight nights of gifts. Basically I just gave them what would have normally gone into their stockings. Considering last year was the first year we ever had stockings, I don't think they'll miss it this year. 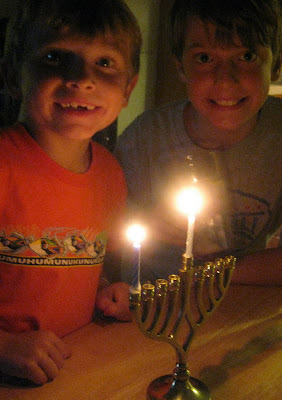 Benjamin's first grade class does quite a bit of cooking. This week they made potato latkes, and Ben was insisted we do it at home as well, with some sour cream (which they loved) and applesauce (not so much). 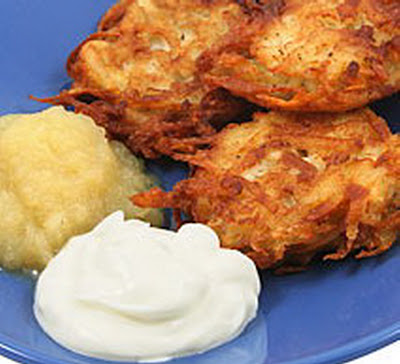 Of course there was plenty of playing with dreidels. For our gelt we used little teddy bears instead of pennies or chocolate coins. 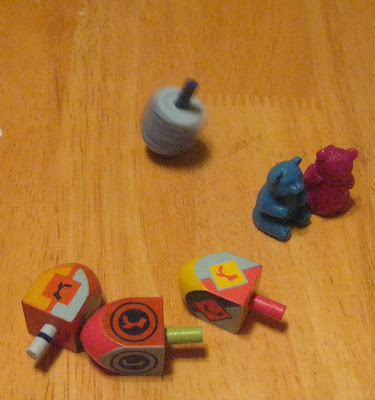 Michael has been tying up loose ends on one project and starting up a new one and he hasn't been home much at all. So he didn't get to experience observing Hanukkah until the very last night.
By Heather Rose-Chase at December 12, 2009