Happy Birthday to ME!

If you have little kids in your life, you know how excited they get when it's their birthday. At some point, adults tend to grow out of that phase and meet the anniversary of their birth with something more like dread than joy. But not me. My birthday is very close to my favorite day of the year. It wasn't always - Christmas Eve is a really miserable time if you want to have a birthday party and actually have people attend. When I was about ten, I told my parents that I was really unhappy that we spent every December 24th running around doing last minute Christmas shopping. From that year on, my parents really rose up and did everything they could to ensure that the last minute shopping took place on December 23rd. It couldn't have been easy for my parents, my little brother was born on New Year's Day, twelve months and one week after me. But I have to hand it to them, they really did a great job of making us feel like just being born was reason for celebration.

And then I grew up and met and married my husband. His family celebrated birthdays quite differently. His experience was far more subdued and sedate. I remember when we were first dating his birthday came first and I showered him in gifts and cards and a birthday lunch and a birthday cake and decorations... and he was so overwhelmed with all the attention that he was actually uncomfortable the entire day! However, when my birthday came three month later, he was wise enough to make a huge deal out of it, much to my delight.

When I turned 25, Michael threw a pretty big surprise birthday party for me at the Disneyland Hotel. Family and friends gathered around for lunch and cake and presents (I remember it as my "Alice" year, as every single gift was an Alice in Wonderland item!). Even my co-workers at the Disneyland Resort swung by on their lunch breaks to wish me a happy birthday. I was blown away, because I'd never before in my life had a single birthday party, on my birthday. I'd had one party one summer on my half-birthday, but it just wasn't the same.

When I turned 30, Michael came up with the idea of having a big birthday breakfast for me. Friends would be willing to come for an hour or two on the morning of Christmas Eve to relax and celebrate before going on with their busy last-minute Christmas preparations. It was a little oasis in the midst of craziness. So every year we've repeated it. The friends and family are sometimes different, depending on travel schedules and out of town guests, but the tradition never fails to make me giddy and happy in way that you normally see in a 6 to 8 year old!
My Uncle Paul and my Aunt Pat, my Dad's youngest sister. 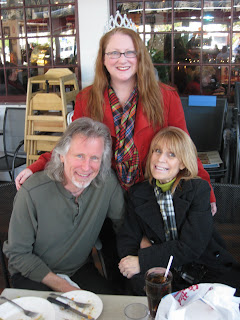 This year was a huge surprise to me, as my two aunts and one uncle came to join in the fun. I have never, ever spent a birthday with them, except perhaps the day I was born when they came down to the hospital to see the newest member of the Rose Family. My family is a little crazy. I say that with love and acknowledgement that I am a full-fledged member of that family. Even in the most dire of situations, we're always laughing and joking and full of energy. And it was so funny to be with my Aunts, being goofy and crazy while my in laws watched the entertainment unfold. They later commented that seeing my Aunts and I in action gave them a whole new insight into my personality!
The Rose Family and the Chase Family! Seated, left to right: Michael, Michael's Mom, Michael's Dad, Benjamin. Standing, left to right: The Birthday Princess, my Aunt Pat (Dad's youngest sis), my Uncle Paul, my Aunt Barbara (Dad's older sis), Nathan, and Tommy (who we count as family as he is our "adopted" son Christopher's younger brother). I neglected to get a shot that included the friends who showed up, but there were a few. 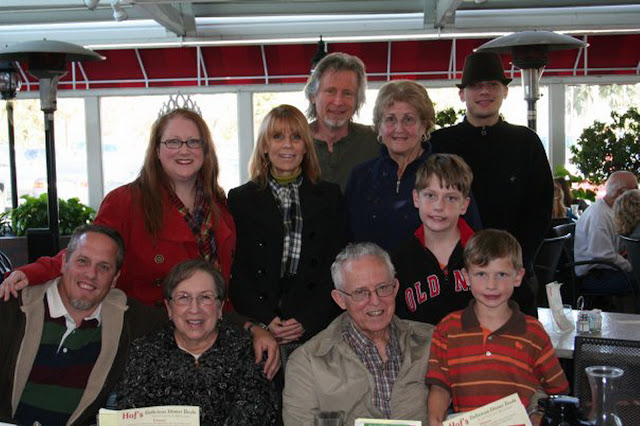 It was a great morning, and once the breakfast was done, we piled into the van and drove five hours up to my Mom and Dad's house. My Dad made my favorite Birthday Tacos, and then presented me with a cake (two cakes in one day, score!) and gifts. After they went to bed and we tucked in the boys, Michael and I ended the night with another long standing birthday tradition, our viewing of Mike Myer's So I Married an Axe Murderer. I love that movie so much! The comedy, the editing, the sound track, the San Francisco location... it's just the right combination of everything I want to see in a film. We've watched it each year on my birthday for the last 15 years.
Birthday Cake Number One: Carrot Cake (almost as good as my Mother-in-law's).
, 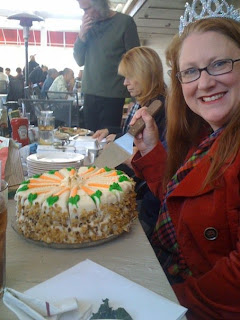 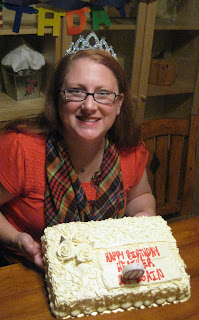 My Dad's famous Birthday Tacos. My parents would tell us we could go out to eat at whatever place we wanted for our birthdays, all I ever wanted was for my Dad to make his made-from-scratch tacos! It just isn't Christmas Eve with out some spicy salsa! 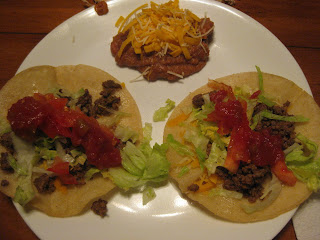 Then we went to bed ourselves, hoping to catch a few Zzz's before the boys awoke us wanting to open Christmas gifts. I do love my birthday. But even more than that, I love my husband who loves me enough to make my birthday the kind of day I look forward to all year!
By Heather Rose-Chase at December 25, 2009