Don't ask me how this happened, but for the first time ever we decided to let the kids dress up for the annual costume parade at school. Not one to simply purchase an over priced, poorly constructed costume off the rack (which would never hold up with my two boys), I decided to sit down and design something just for them. Nathan wanted to be a mummy. Not one to embrace horror, I talked to the boys about mummies and pulled up photos so that they had an historical point of reference and not just the desire to scare people. 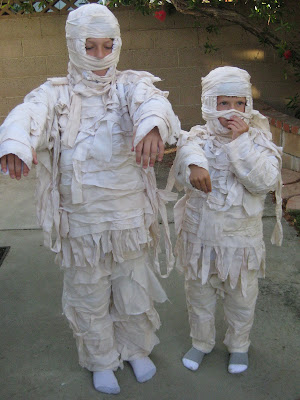 After coming up with the idea, I made the kids come with me to get the supplies. The costumes were made using a base of karate pants and pullover hoodies, all found at the local thrift store for about $6 total (and they made us take home some free nectarines which was an unexpected treat). I used two double white sheets, $7, ripped and torn into strips and dyed in a giant vat of black teabags, $1. Then each strip was machine-stitched one at a time onto the pants and hoodies. The hooded sweatshirts were pretty big, so the silhouette looks more Michelin Man than Mummy to me, but Nathan and Ben were beyond thrilled at the final outcome! 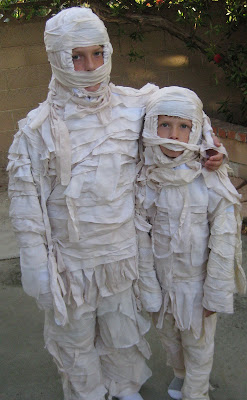 This is the before-school photo, in which they didn't want to smile so they moved the strip across their mouths. Tomorrow I have additional strips to go across their faces, but for school I did not want them to be too covered. These were a lot of work, particularly as it was kind of a figure-it-out-as-you-go-along type of process. But since those are generally my favorite types of projects, it was a lot of fun as well. The best part is knowing that these are nearly indestructible (a good thing for my wild boys) and that they cost about $8 apiece in materials. 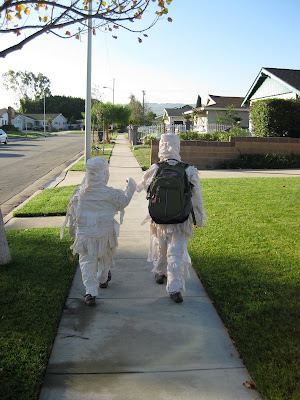 Okay, that isn't true. The best part is really the glowing excitement and admiration in the eyes of my boys when they saw what I had done for them. I never get that when I make dinner or do laundry!
By Heather Rose-Chase at October 31, 2009