Michael has three sisters and a brother, Mitch. His oldest sister, Holly, lives right around the corner from us, and Mitch and his wife live about three miles away. His two other sisters, Heather and Heidi, both live out of state. The last time the entire family was together was in 2001 for Mitch's wedding. We've had a few visits from Heidi and her family, and a visit from Heather and her family, but never both Heidi and Heather at the same time! One of these years... This week Heather, her husband Layne, and their three children are here on vacation. They live in Utah, which has a big Autumn break from school this week. Unfortunately, their visit has coincided with Michael's "Hell Week" load in of the show he's been working on. So they haven't had any face time with Uncle Mike! They decided to go to Disneyland for a couple of days, so of course the boys and I had to join them, after school of course! 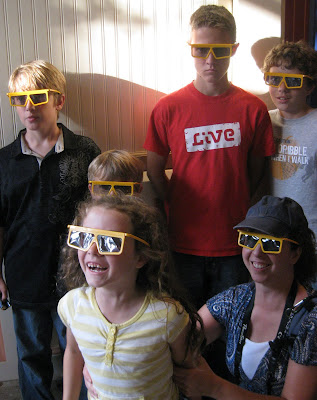 Here are all the cousins along with cool Auntie Holly waiting to board the Toy Story Midway Mania attraction at Disney's California Adventure. It's an interactive, 3-D ride that my boys really love. Please note the three boys in the back row, Nathan and my two nephews. Don't they look thrilled?? Nathan is about to turn nine, but he's got the teen WhatEVer look down pat. 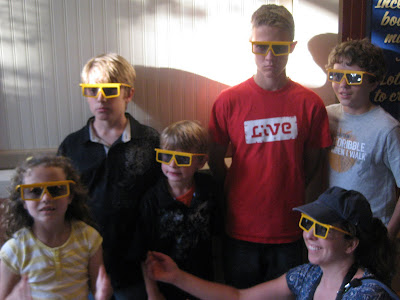 But here they are, when they were young and sweet and cute! This was taken after Mitch's wedding in 2001, back when Nathan and our nephews were the only Chase cousins! Now there are seven cousins. This was the first time these cousins met... we'd returned from Japan just days before 9/11, and Mitch and Jamie got married on 9/15. 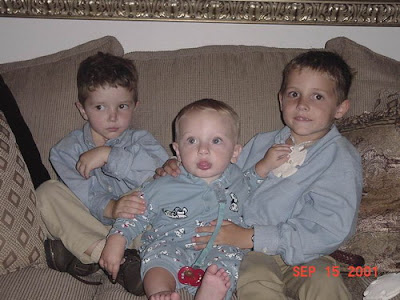 I have to laugh when I see this photo, as we were the recipient of many items of hand-me-down clothes from these two boys, including the very outfits they are wearing in this picture! Thank you, generous Auntie Heather, for sharing all those great clothes! Now if what you want is cute, then let me present Benjamin and our niece! Our niece is one year older than Ben. Look at those stunning curls! She's such a beauty. Ben had an amazing head of curls until he turned three and his hair went straight like his Mama's. Sigh. Why did my straight hair genes have to dominate over all the curly genes that both Mike's family and my own family were blessed with? Anyway, these two sure are cute. 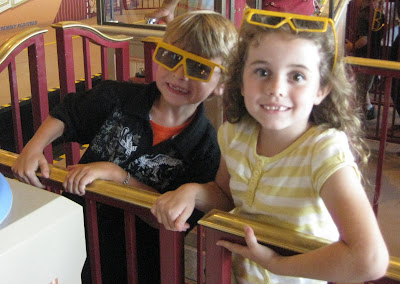 And just in case that wasn't quite cute enough for you, here they are when Ben was 10 months old and our niece was just a couple months shy of two years old. They were the same size then, and now Ben is just a tiny bit taller than her. 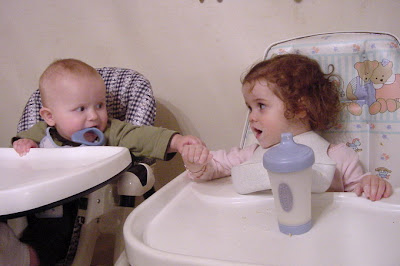 This photo comes up every so often on our screen saver, and my heart seizes every time at the memory of this day so long ago. Heather and the family were down here to celebrate their middle son's birthday, and we put Ben and our niece in high chairs next to each other and they just sat there chatting in a language only they could understand, holding hands. So precious!
I wish all the cousins lived closer together or that we had the opportunity to let them get together more than once every couple of years. My family is quite small, and when I was growing up we lived many hours away from them. We only saw my cousins at major holidays, switching sides of the family each year. My cousins, however, all lived closer together and they have many shared memories of everyday life and major milestones that my brother and I simply don't. Michael has a huge family. A dozen aunts and uncles and hundreds of cousins, and he and his siblings grew up quite close to many of them. I'm so glad I married into Michael's family so I can have the experience of having more family than you can count!
I remember shortly before Michael and I were engaged, his Grandmother Chase passed away. I went with him to the funeral, and noted that the large church was packed. It was almost a fire hazard with all the people crowded in. There were no available seats; every aisle was filled with kids sitting on the floor and the walls were lined with people standing. I turned to Mike and marvelled that his Grandmother must have been a very popular person to have so many friends who would come to her funeral. He chuckled and then told me that every single person in the room was a relative. Coming from such a small family (I have a total of eight first cousins if you count both sides of my family) this fact was more than I could wrap my mind around. I'm still slightly stunned, fifteen years later!
By Heather Rose-Chase at October 01, 2009