Third Grade is a big deal to me. It is the first year that I remember very well. I remember the school, my friends, my clothes, and major events like the total eclipse of the sun, and my Grandfather's passing. It was also the year I discovered writing... the ability to arrange words in an order of your choosing to create a story or a poem and provoke a response in the reader. That was the year I declared I would be a writer when I grew up. And if you define writer as someone who earns money from the written word, then I grew up to become one. So it's just somehow stuck in my brain that this is the year that somehow counts more than all the years before.
So far the year has gone well. Nathan's teacher is the only male at the school, and I was delighted my son was assigned to his class. I was even more thrilled when I found out that our district started a writing program last year that really pushes the 4th and 5th graders toward developing writing skills, and the 3rd grade spends the year preparing the students for the program. It takes the kids away from a reporting style, "I saw a red truck. The truck was going fast. It made a lot of wind," and pushes them toward more interesting phrasing, "My hat flew off in the wake of the red streak of a speeding truck."
The homework has been fun for Nathan. He's been coming up with sentences that show rather than tell, "The boy's head sunk to the desk and a low moan escaped his lips after reading the next assignment," instead of, "The boy didn't like the next assignment." I think this style of writing fits his dramatic personality perfectly!
We read some of his stories at Back to School Night, and both Michael and I were laughing out loud at the crazy situations his characters (always Nat and his little brother Ben) get into, and the outrageous ways they get themselves out of it, using teamwork and creativity. All the stories were clever and humorous, and a little bit violent. All I can say is that I'm grateful it's coming out on the page and not in real life! 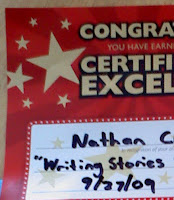 On Monday, Nathan came skipping out of school and even did a little leap when he saw me. He told me that he'd been presented an award at the school-wide assembly that morning which honored his story writing skills! I was so proud that I promptly burst into tears. The award came with a free dinner at TGIFridays which we'll have to enjoy during a week when Michael isn't working round the clock. Nathan said he was a little embarrassed that he got the award in front of the whole school, but I told him that being creative is a highly enviable talent, one he should be proud of. Life is just easier when you're creative... there's always a way around the seemingly impenetrable road block if you just think in a creative manner. He agreed and rattled off a few ways being creative can solve common challenges.
There are few things more satisfying in life than seeing your offspring recognized for their strengths by someone other than you. I don't know if Nathan is going to remember this day for the rest of his life, but I know I will!
By Heather Rose-Chase at September 29, 2009