Forget your troubles, come on get happy!

With the weight of major decisions weighing on us, we grabbed sandwiches for dinner and headed for the most soothing place around... 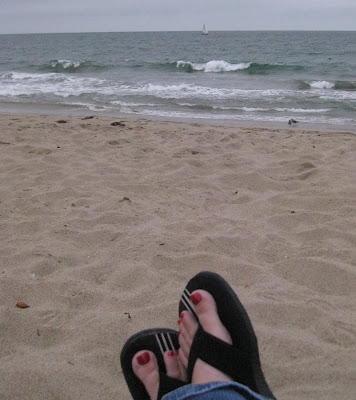 The beach. No sunset tonight, there was far too much fog. But the noisy repetitive motion of the waves was enough to quiet our minds and bodies for a couple of hours. 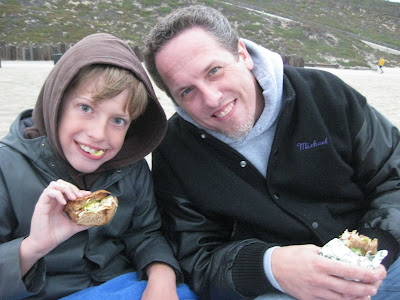 We bundled up heavily - it may be August, but it's chilly here in the morning and evening!

What could possibly be weighing us down, you ask? Well, nothing after a walk along the shore at dusk!

But in all seriousness we are facing the issue of living in a rented house that has a few major things wrong with it at the moment. We sent a list with photos of the things that need to be fixed to our ninety year old landlady along with the rent check, and then we waited. And we called and left messages, and then we waited. And we waited. Finally we called her maintenance man direct, and we found out she's out of the country in Sweden, the land of her birth. And then we got a call from her son, saying not only is she in Sweden, she's in hospital in Sweden. So the problems of our house are the furthest thing from her mind, even though they are the first thing in ours. We're faced with a few options and they are all difficult, not an obviously easy one in the bunch. It seems like every time I say something along the lines of "Wow, this was a really difficult year," it simply gets even more complicated with all new challenges to be tackled.

So a little Pacific Ocean therapy was in order. When you stand on the edge of our state, our country, our continent... all those giant challenges just seem to shrink. For a little bit anyway!

Email ThisBlogThis!Share to TwitterShare to FacebookShare to Pinterest
Labels: beach