To me, camping is cold water at the Sheraton. ~ Judy Rose (my mother) 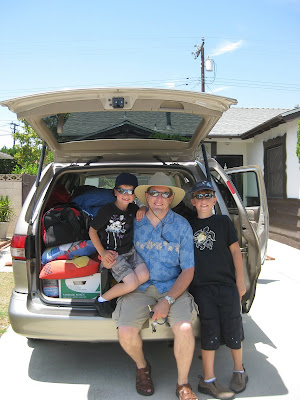 The intrepid explorers pack the trusty mule, er van, high and head out on the trail...
I never camped growing up. Seriously. I didn't make up that quote about the Sheraton, my Mom said it all the time when I was a kid! And I was the ultimate girly-girl. I didn't even own a pair of jeans until the fifth grade, and I barely wore them because they weren't as comfortable as the skirts and dresses I'd worn my whole life. Michael, however, used to do the kind of camping where you hike in twelve miles and carry a shovel to make your own toilet out in nature. Nothing at all like the Sheraton! And not something a girly-girl would be caught dead doing! The first time I went camping was shortly after I married Michael. He took me to a very rustic tent-only spot high in the wilderness of the Sequoias for my inaugural trip. No showers, no flushing toilets or running water, recent bear sightings, and lots of graphic signage warning against leaving any bit of food in tents and not in the provided bear lockers. It was a miserable failure, with me trying to hide my tears as I tried my best to love what my new husband loved, but could not find it within me to fake it convincingly. I love nature and the outdoors. But I also love beds with sheets, toilets, and a warm, if not hot, shower. Later Michael realized that everything would have been different and I might be a camper chick if he'd started me out a little easier. Oh well. Needless to say, when the ultrasound revealed Nathan was a boy, I breathed a huge sigh of relief that I was off the hook and that Michael would have a camping companion. They went on an overnight trip several years ago. And they've done a couple backyard camp outs. But now that Mike has his spiffy new tent and air mattress, he decided to plan a weekend trip with both his boys. And I planned a weekend trip right here in my hometown, which included hanging out with girlfriends, lots of girly movies (five!), sleeping in (until 10:00 a.m.!), a pedicure (which I got nearly for free!), and lots of peace, quiet, and solitude. Ahhh, heavenly! I can't say for sure who had it best, but I know that the entire family was pretty happy about this arrangement! I will stand up for myself just a little bit and say that in the 12 years since that first camping experience, I have changed a lot! I live in jeans and rarely wear skirts or dresses! Having children means dealing with a lack of privacy, bodily fluids and various messes that people without children are blessed to not have to think about. Having boys means playing in the mud and handling insects and animals, living and dead. Living internationally changed me further and I can do fearless things like breastfeed on a crowded train, use a squat toilet like a pro, and eat anything as long as I don't ask what it is. If I was to experience my first camping trip today for the first time, I would likely not have the same adverse reaction. Well, maybe not as strongly anyway! I guess you could say I could tolerate it a little better. We'll get a chance to find out soon, as next month we're going camping up in Zion National Park in Utah with some new friends. Those of you who know me well can start praying for me now...

Email ThisBlogThis!Share to TwitterShare to FacebookShare to Pinterest
Labels: camping, growing up, Michael