This week is packed with old friends! In an unusual change from how things normally go, one of my very best friends moved away a few years ago. It was a bitter blow to me, and it sure made me experience a bit of empathy for the trail of people we've left behind. The good news is that they moved about an hour away from my parents, so we do our best to get together every time we're up there for a visit. But this week they were down here and wanted to go to (where else?) the beach! Of course my kids are always up for that! 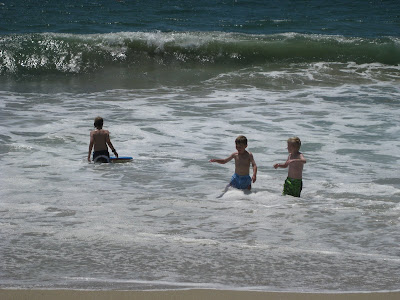 Left to right: Nathan, Benjamin, and Joshua.
Nathan's new boogie board was really put to the test! On land, Nathan is somewhat awkward... but put him in water and he's... well, like a fish! He's still learning how to catch a wave rather than let the wave catch him though! He was pretty battered at the end of the day, lots of cuts, scrapes and a bruise or two (which again means a 10 out of 10 on the Excellent Boy Adventure Scale). 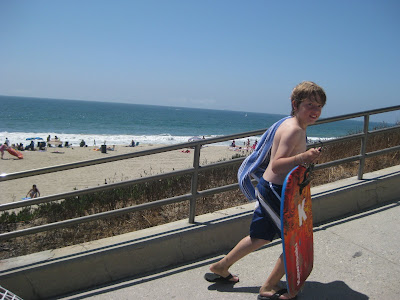 Nathan said he's willing to use his own money to feed the meter so we can go to the beach more often! Both the kids already have a Coppertone tanline going on like the old ads... too bad I just burn with my incredibly pale skin or I'd take him up on that! 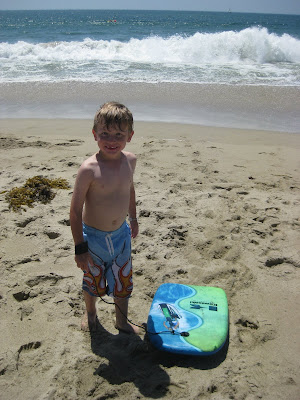 Ben is still barely learning to swim and the ocean isn't exactly the best place for him to try out his new skills! But he made a good effort with the new boogie board and I'm sure by the end of summer he'll be using it as much as big brother!
By Heather Rose-Chase at July 07, 2009