Since becoming a parent I cannot watch television or films where there are children in any type of danger. I can't handle injustice towards kids to be used as "entertainment." I can't even handle the news when they report a child abduction or other crime against a young person. There's this fierce, protective part of me that never surfaced until I was responsible for protecting children of my own. But what happens when there is no way you can protect them?
We live very close to our boys' school, right around the corner. If we climb over our back wall and walk through our back neighbor's yard, we'd be in front of the kindergarten playground. Being this close, we hear the school bell ringing throughout the day. Today was hot, and I was expecting our new oven to be delivered so I was waiting at home with every window and door flung wide open. Close to 11:30 a.m., I heard the school's fire alarm bell ringing. They have regular fire drills, so it's not unusual to hear it ring for about 10 seconds. Today, however, the bell continued to ring for nearly two minutes. Odd, I thought, and then continued doing household work. A bit later I heard police sirens, which made me glance at the clock and note that it was lunch recess time. It's pretty quiet for recess, I thought. And then I heard a helicopter, which sounded quite low for this area. I looked out the back door to see a police helicopter circling from the school over our backyard and back to the school. And then, quite predictably, I completely freaked out.
I sent Mike a text and rang my Mom saying I was going to the school and didn't know what I'd find and to please say a little prayer. I drove around the block and saw the giant school yard filled with balls and jump ropes, but totally empty of children. I pulled up along side a police officer and asked what was going on. He tersely advised me to go back home and lock the doors and windows, but that is all I could get out of him. I rang the school and was simply told the school was on a lock down... all students were in their classrooms with the doors locked and no one was allowed to come onto the campus or to leave the campus, but no other details. By then I was furiously texting Michael gibberish as my hands were shaking, and when he stepped out of a meeting to call me I was nearly hysterical on the phone. He hurried home, calling Torrance PD on his way and was told there had been a burglary in the neighborhood and the suspect had fled near the school. Precautions had been taken to assure that the children were safe by locking them into their classrooms. Mike relayed this info to me and I calmed down a bit but continued to pace back and forth at our back door, watching the helicopter circle around and around.
To be so close but to not be able to get my hands on my offspring, however safe they might have been, was the worst kind of torture. Michael tried distracting me with details of an upcoming project, but I only half listened, my ear tuned to any sounds coming from school's direction.
Finally the helicopter flew away. Michael called the school to find the kids had still not been released. Without the sound of the helicopter, every little sound in the neighborhood set me on edge. Five minutes before 2:00 p.m., we heard the long "all clear" bell rang. We called the school and were told we could get the kids.
The kids were puzzled as to why both Mom and Dad were there to pick them up, but we tried to play it cool and keep big smiles on our faces. They were excited to tell us how they'd had a "shelter in place" drill! Only it hadn't been a drill! And they'd had to stay in their classrooms! And eat their lunches there! And they got to watch movies!
Later I heard from some of the moms who were there to work in the classrooms and weren't allowed to leave, how the classrooms without attached bathrooms had to set up emergency port-a-potties in a corner of the classroom, and how the emergency kits we send at the beginning of the year had to be raided as the cafeteria couldn't deliver the hot lunches to the students who'd ordered them. All reports were that the students were hot and wiggly from being cooped up, but everyone was calm.
I have so much to be grateful for tonight. That all 900 students, staff, and parent volunteers were safe. That there was no tragic end to this story, for the police or the suspect. That I have a husband who will drop everything to be at my side when I'm in distress. That my Mom is always a calming force when I call her hysterically crying any time night or day. That my boys perceived this to be a "fun" experience. And that right now they are both safe and sound and softly snoring in their beds, resting up to face another day where just about anything can happen, good or bad. I'm just glad this one is over! 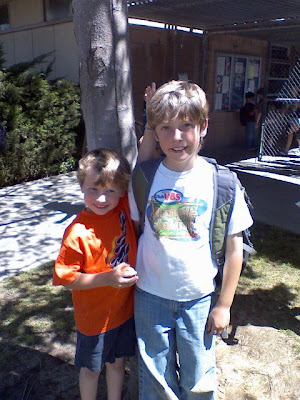 Happy children, perplexed over why both parents came to pick them up... 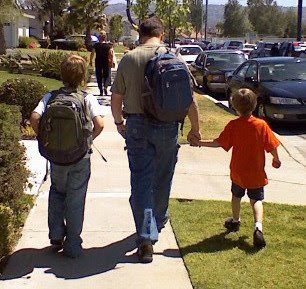 Walking home, telling stories of eating lunch in their classroom...