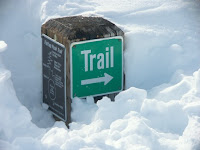 Today was the second trimester parent/teacher conference for both our children. It served as yet another (unnecessary) reminder that our boys are incredibly different!
Benjamin has the same kindergarten teacher Nathan had two years ago. We'd had Nathan's conference first, so we spent a few minutes discussing his progress with his old teacher. Her most profound statement was that instead of us blazing a trail with Nathan, which Ben will then follow, we are actually blazing two separate trails, in very different directions. I like her choice of words- blazing a trail feels exactly right, plus it feeds our adventurous nature!
I see exactly what she means every day when things we've used with great success with Nathan have absolutely no effect on Benjamin, forcing us to go back to the drawing board and creatively come up with new ideas on how to motivate our youngest child. There is absolutely no rest as we try to stay a step or two ahead of these guys! Although it frequently feels like they are leaving us in the dust, running ahead.
Which reminds me of when we climbed the Great Wall of China. Benjamin, at age two and with congenital heart disease that is particularly affected by being at high elevations, could not be convinced to stay at the slower pace which Mike, Nathan, Uncle Jeff, and I were forced to go at. Those giant uneven steps were wicked! Benjamin was gracious enough to occasionally sit down and call out impatiently to us Come on, Mama! 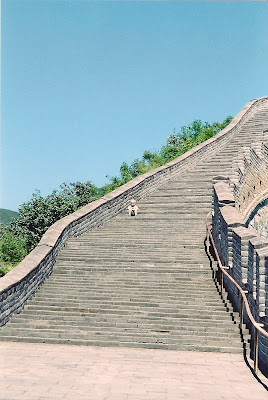 We did eventually catch up, and I'm praying every day that we do the same in our current child-rearing stage!
By Heather Rose-Chase at March 25, 2009