The last two days have brought plenty of rain. More rain is forecast for the three day weekend. I'm leery of the rain here, because it always seems that when the tiniest precipitation hits the ground, all L.A. drivers completely loose both their minds and their ability to drive. It would be funny if it wasn't so frightening!
Yesterday the morning dawned bright and warm, and the boys dressed appropriately in shorts and tees. I heard rain was on the way, but judging by the blue skies dismissed it as a meteorologist fantasy. By 11:00 a.m. the sky was dark with threatening clouds. By noon the skies had opened. Knowing that Ben got out at 2:00, I drove over to the school at 1:00 and got the prime parking spot right in front of his class. I spent the hour catching up on writing while I enjoyed the rain's sweet serenade. Come 2:00, Ben stood out among his far warmer classmates with their long pants, sweaters and jackets. We ran into the van and Ben climbed around the seats, snapping photos on my phone and telling me funny stories while we waited for Nathan to get out at 3:15. 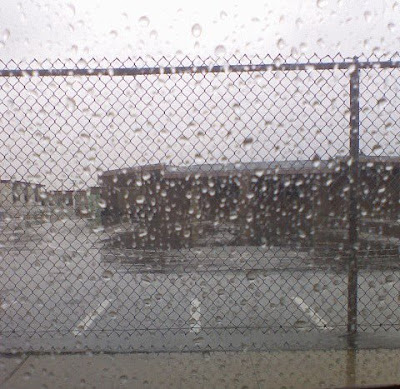 Close to 3:00 the streets were flooding with water and cars desperate for a place to park. As the rain fell faster and harder, I gave myself a pat on the back for being so wise in coming early. A woman ran up and pounded on my window, demanding I move my minivan forward. The car previously parked in front of me had left, leaving another prime parking spot for a lucky parent. I told the woman to just park in front of me. She got very irritated and loudly insisted that I move forward so she could park behind me. I looked back and saw her enormous SUV and (rightly) assumed that she didn't know how to parallel park her beast. Since Ben was in the car with me, I simply moved the van rather than yell what I really wanted to say: If you can't handle it, you shouldn't be driving it! Ben's comment made me come out the winner, though: How rude! She didn't even say thank you!

Today I was scheduled to volunteer in Ben's kindergarten class as I do each Friday. Michael has been sick for a week and he evidently shared his germs, as I woke up feeling horrible. I thought about calling in sick and staying home. Then I felt guilty and thought I'd just go in and check the homework and then come home. But when I walked into the classroom from the pouring rain to find 21 hyper kindergartners and a teacher who looked like she was going to pull her hair out (if it didn't fall out first), I decided to suck it up and stay for my normal three hours. I don't know how teachers do it even on the best days, day after day, month after month, year after year. Toss in the rainy day schedule of no break and I'd quit on the spot. I'm just glad that we only get rain a handful of times each year. I can't imagine the nightmare caused by regions where it snows!

This afternoon the rain stopped and a little sun slipped in to dry things up. We all walked home from school and the boys were dejected over the lack of puddles to jump in and the loss of an opportunity to use their bright yellow umbrellas. According to the news they'll have plenty of chances for that over the next three days! 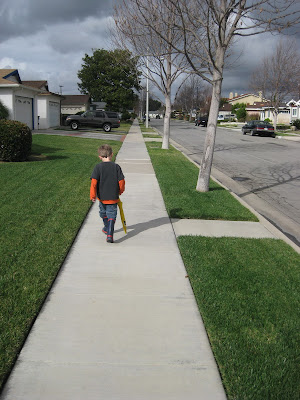