We lived on the east side of the San Francisco Bay for a couple of years after moving to the U.S. from Japan. Benjamin was born there and has the distinction of being the only non-native Southern Californian in our little family. Here we are at Lake Elizabeth in Fremont.
Mike was snapping photos of two year old Nathan chasing the Canadian Geese who stop at the lake during migration, and caught me in his lens. He called out, "turn sideways so I can see your pregnant belly," which as you can see, I did. Later that night we were looking through the photos and noticed Nathan in the background, also turned sideways and showing us his belly. It makes me laugh every time I see it! 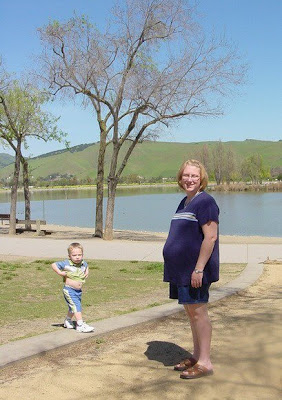