With all the home cooking going on around here, we've found it necessary to do some rearranging of the kitchen cupboards. We have one that is very deep, and in the furthest reach of the back I saw a large appliance that I didn't recognize. I got down on my hands and knees and pulled it out... a brand new, never before used bread maker! The boys jumped up and down cheering at the revelation that we had an appliance that can create bread with the touch of a button. I laughed at their delight until tears were streaming down my face, and then we went to go get some ingredients to put together the "easy" loaf of white bread that the directions said would be a great place to start. 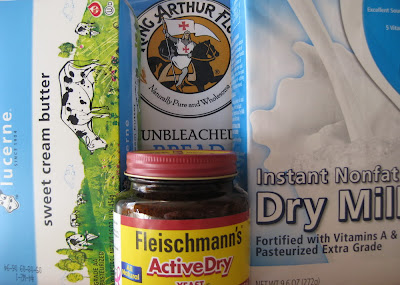 I followed the directions very carefully, beginning with the first step. Unfortunately, there was a step before the first step that I didn't catch until everything was already in the pan. So we had to do a crazy move to get the ingredients out without the yeast touching the water so we could put the mixing paddle in (oops). I debated on whether to just dump it all and start over or to just continue. The directions are so exact! No room for error! The tiniest mistake can result in catastrophe! Never one to back away from catastrophe, we decided to just continue to see what would happen. 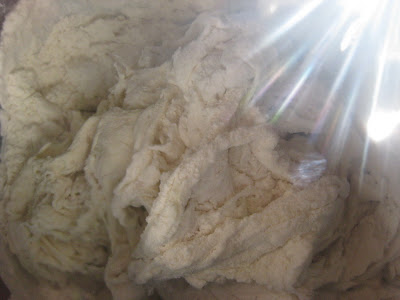 The bread machine has a window in the top, and you would think it was a brand new episode of Phineas and Ferb the way the boys were glued to the "screen"! 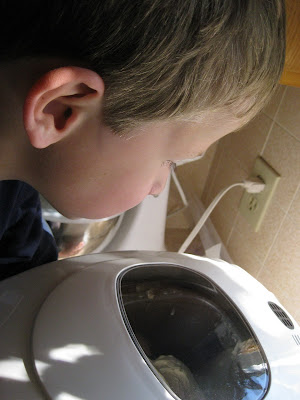 We watched it rise up as it baked, beautiful and golden. The house had the overwhelming smell of the yeast, so instead of bakery goodness it smelled a bit like a brewery. After it was done baking, the entire top collapsed, which made the boys laugh. 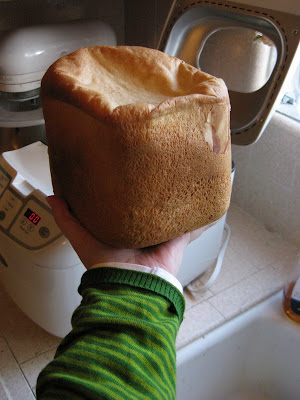 I wish I had a photo of Nathan and Benjamin eating the fruit of our labor... but alas, despite its questionable appearance, they tore into it and inhaled it before any such photo could be taken!

We're going to give it another try with a new recipe, making sure the mixing paddle is in place before we start! Oh, and a belated thank you to my Mom and Dad, who bought us the bread maker back in 2005...