While Nathan was a pacifier boy (until he turned three and we had to forcibly remove the Binkie from his mouth), Benjamin has always been able to just use his own fingers, hand turned palm up, middle two fingers in the mouth, to soothe himself. Like this: 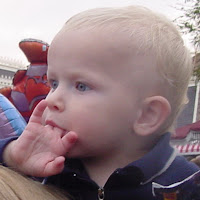 Or, an even better example with Daddy also modelling Ben's finger sucking technique: 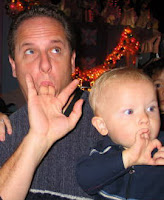 He also has a blankie, which he has always called his "Baby". It's not the blanket he loves so much as the tag attached to it that delights him. And I've had to perform surgery a couple of times to reattach the tag that was loved right off. The original blanket was from Disneyland, and a few months after he'd really grown attached to it I found it's twin at the Disney company store (employees only) for about 75% less than the original one. So I bought it, thinking we'd have a spare to swap out when laundering the first one. It was a great plan until the day when our sneaky boy Ben saw BOTH "Babies" at once! From that point on he would ask for "Baby" and "More Baby". There have been times he's been very generous with his Babies. My Dad had surgery on his Achilles tendon a few years ago, leaving his foot in a cast. Benjamin sweetly wrapped Grandpa's cast in one of the Babies for about 3 minutes before claiming it back. And this morning as I was shooing him out the door to school, I caught him tucking these baby dolls into his bed, wrapping them gently with his Babies. 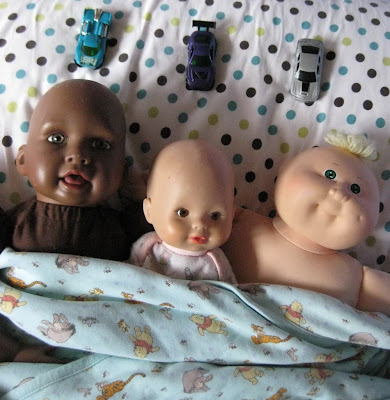 He told me that the baby dolls had taken their bath and needed to dry off before they could get into their PJ's, and they were tired and needed to nap while he was at school. He said he gave each of them one car to play with when they woke up if they were bored while he wasn't there to play with them. It was so sweet and tender, considering these dolls are normally enlisted in the Air Force, doing flying maneuvers (sans plane) through the living room, or as professional stunt men being hung from the top bunk with pipe cleaners.

The doll on the far right is my own Cabbage Patch doll from my childhood. The middle doll was a garage sale leftover (how we ended up with it is beyond me, it's not ours) that is missing most of it's fingers. The doll on the right is a prop doll that I've used in a couple of productions, and was even featured once as a well-wrapped baby Jesus in a Christmas show (it's the size and weight of a real baby). All of these baby dolls have the same name, according to Ben. They also have the same name as one of his stuffed kitties. It's quite popular in our house! The name, you ask? Why, Soy Sauce of course! He must really like the name!