When Nathan was born, he got a lot of cash. We did what good parents do and opened a savings account at the credit union for Michael's employer at the time (a certain theme park that has a mouse for a mascot). We added to the account occasionally when Nathan received a check made out to him, but mainly it just sat there, growing a pretty good sized chunk of interest in the nearly eight years we've had the account.
In yesterday's mail I received a statement from the credit union that included a $2 "Withdrawal Escheat Fee 2008" and a happy little message that says, "This is the final statement you will receive for this account". Odd, I thought. So I rang up the credit union and was told the account was in escheat to the state of California. Asking for an explanation, I was told that when an account sits untouched for a specified period of time, financial institutions consider them unclaimed and are obligated to hand over the cash (or stocks/bonds/safe deposit box contents) to the State. This lovely little process is called escheat, and it has roots back in the 1300's when people would die and the king would claim the estate if there wasn't someone else to legally claim it. In modern times it is a way that banks and companies can safely turn over what they believe are abandoned or unclaimed funds without having to continue managing them. The amount of time varies from state to state. In California you have three years before you have to make a deposit or withdrawal or it's bye-bye account. I was totally floored by this!
I grew a little outraged when she said the account was closed in October. I was holding the statement for September and it had no notice that the account was in danger of escheat, and that it definitely wasn't "unclaimed" as she claimed... after all they hadn't contacted us in any way, and none of the quarterly statements were ever returned to them (giving them the idea that we were unreachable).
I was referred to the California State Controller's Office where I found out that I have until June 1, 2009 to somehow get the money back from the credit union. Of course, the credit union is saying I have to contact the Controller's Office so it's a little game of Money, Money, Who's Got The Money. All hope is not lost; I've been assured by the lovely California State Controller's Office website that property or the equivalent value does get returned provided you jump through the appropriate flaming hoops of death to get it.
I was telling my tale of woe to the entire family last night at my Mother-in-law's birthday dinner and Nathan grew more and more upset about the situation and the fact that we were talking about his money that the government had apparently taken. In the way that only our bright and creative boy can, he immediately made the leap to the idea that government is bad and evil. And then of course he took it one step further and began creating drawings and slogans saying 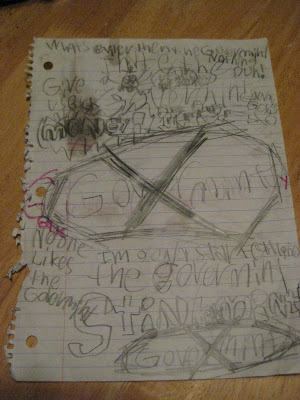 DOWN WITH GOVERNMENT, and demanding to know who was in charge of this country. Auntie Holly tried to help by teaching him the sign for anarchy, and he enlisted Ben into his cause and they began chanting anti-government sayings. My favorite was "PU! Who smells the Stinkerment?" Of course I was trying incredibly hard not to laugh while at the same time trying to keep him from disturbing everyone in the restaurant. Having worked briefly as a political activist in my 20's, I felt some measure of pride in my little guy and his passion, no matter how misguided.
In a very, very, very small way I'm glad this happened because it gives us the chance to talk to Nathan about the government here in the U.S. and compare it to the governments of the other countries where we have lived and visited. And to let him know that we have the ability to work hard to change things we don't like with our government, while other people in other countries have no such right or privilege. And because all this is tied into Nathan and his money, he is quite interested to learn more about it!
And just a word of caution to all of you: go make small deposits into your rarely used accounts, and take a peek into your safety deposit boxes just to keep them "active"!
By Heather Rose-Chase at January 07, 2009