Fly Away With Me 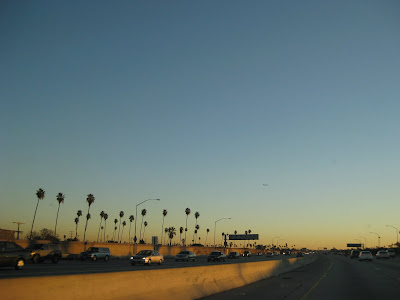 Far in the distance a plane heads toward LAX as the sun sets over the Pacific Ocean. This year we thought we would be leaving Los Angeles, California, the United States. We didn't. And for the time being, we aren't.

In college, when my insomnia was particularly disturbing, I would drive my little red pickup to the departures level and park at the curb near the international terminal. In the peaceful hours of the night I would daydream about being on the huge planes headed for far off destinations. Rarely has anything been so soothing to my wandering soul. Nowadays if you so much as tap your brakes the airport police descend and tell you to keep moving, which means no time for daydreaming at the airport!

With the disappointment of our aborted move to Macau still so fresh and raw, it is proving far more difficult to stay in one place than it's ever been to move around.

I'm trying to take comfort that for all the planes that are leaving LAX, there are just as many arriving to this grand city. And in 2009, I will attempt to find contentment where we are instead of desperately longing to be elsewhere. For the time being.