Yesterday we received incredibly sad news. American Musical Theatre of San Jose has closed it's doors and has ceased to exist. The reasons behind this can be found in many places, such as here and here. Sad stories to read, of course, but what makes it sad for us in particular is our history with AMTSJ. We had just returned from living in Japan and were homeless and jobless, and the dust was settling from 9/11. Things were looking rough in the live entertainment industry, which relies on donations from patrons to keep the wheels turning. Wealthy patrons and benefactors were pouring their money into the Red Cross and other charitable organizations to help those who had lost so much. Mike had two job offers. One with a prominent theater company in La Jolla, CA with a history of chewing up and spitting out their technical directors at a rate of one every year or two, and one in San Jose, CA for this far less prestigious but still very interesting theater company. We chose to go North rather than South, primarily because of the tight family atmosphere at AMTSJ. We knew either way we went, we'd be moving away from all actual family members, so an extended show business family was what we needed. We feel we made the right choice, because we had an incredible run there. There were lots of ups and downs, but it was a period of major growth, not just for Mike professionally, but for us personally as well. We were broke all the time, but never went without. We saw a lot of shows, for free! It was where Nathan took his first steps and got to explore a giant shop filled with props and set pieces, and play with the shop foreman's dog Sheeba. It is where our 100 year old piano made it's stage debut (perhaps), used as a set piece for a production of Funny Girl. It was during tech week for a show that I discovered we were expecting Benjamin, and I raced down to the theater to steal Mike away from the 20 hour workdays to hurriedly share the news at the loading dock. It is where Benjamin was born, had his heart surgery, and where we made some of our closest friends. It is where some of our quirky family traditions were born, such as going out for ice cream when it rains (because there is never a line). It rained a lot the 23 months we lived there, so we enjoyed ice cream on a regular basis. We also took advantage of the close proximity to San Francisco and made it our playground. And it was, until recently, the place where we'd lived the longest, just shy of spending two Christmases in the same home, a record for the nomadic Chase family! 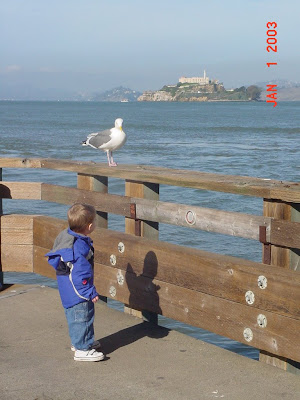 
About the time we left there were major changes to AMTSJ coming down the pipeline. The writing on the wall indicated that Mike's job and department would be eliminated as they wouldn't be creating and building their own shows anymore. Instead they would make way for the many touring productions that come through each year. The job offer to move to Hong Kong was a lifeline and we took it, and it was the right move to make. But we were sad to go and leave behind a place where our little family had expanded and close friendships were forged. And yesterday's news that the company has been pulled apart and the doors closed brings much sorrow, particularly so close to the holidays. It is one thing to hear on the news that companies are going under and people are losing their jobs, but it's very different when we ourselves have so recently lost a job, and every day find more and more of our friends and relatives are also losing their jobs. It will definitely be a somber Christmas this year for many, many people. It feels very much like it did back in the aftermath of 9/11 when live entertainment was hit so hard by that crisis. The future, as painted by headlines today about the recession, is uncertain. God bless us all, particularly our friends and "family" at AMTSJ. 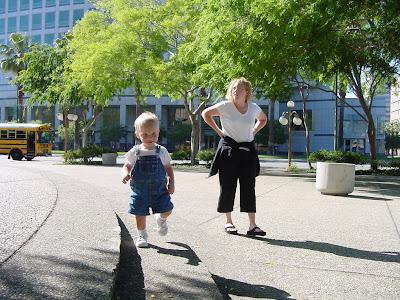 Playing on the steps outside the theater, waiting for Daddy to come out for a quick lunch break during Tech Week on a show in Spring of 2002. 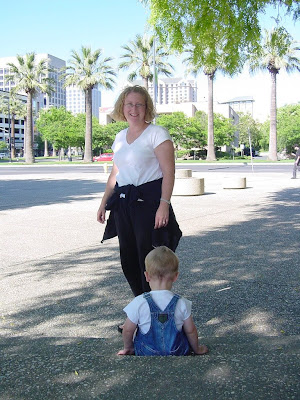