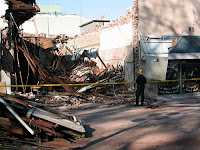 My Dad called this morning to tell me it was the five year anniversary of the Paso Robles earthquake, Benjamin's first experience with one. My parents live about an hour from Paso, and that year we were up at my parents' house to celebrate my birthday and Christmas. My Dad and I went into town and brought six month old Benjamin with us. Our intended destination was the DMV in Paso Robles so that I could renew my drivers license before my birthday on the 24th. I had a new (and decent!) photo taken and then we left to go do some last minute Christmas shopping. My Dad had something specific in mind for my Mom and we ended up at the Black and Decker Outlet in a small strip mall in the neighboring city of Atascadero. I was pushing Ben in a stroller through the narrow aisles when we heard a fierce rumbling followed by the unmistakable rolling of the ground. We were surrounded by boxes of tools piled on shelves reaching high above our heads. Thanks to the shaking and gravity, those heavy boxes started tumbling down around us- an obvious recipe for disaster! 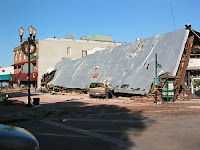 I darted toward the front of the store leaning as far over the stroller as I could to protect Benjamin from the dropping boxes. At the front of the store we were confronted with a giant plate glass window, nearly two stories high. After battling the fear that the window would crash down on us, I pushed the stroller forward, only to be pushed back by what felt like a wave! It was a bizarre sensation, and I tried a second time, successfully getting out the door and missing a concrete bench which split in two and felt apart as I passed, and a tall metal lamppost which teetered and then fell over, missing a row of parked cars. I found myself standing with a group of German tourists who had been in the dressing rooms at the neighboring Ralph Laurent Outlet in various states of undress, wearing clothes with the labels still attached and expressions of intense fear. I looked around and panicked when I did not see my Dad anywhere. Being the consummate gentleman that he is, instead of running to the front of the store, he ran to the back to make sure everyone got out. When he finally emerged I felt such a sense of relief! The employees of the Ralph Lauren store were trying to talk the German tourists into coming back in and handing over the merchandise, but it didn't look like any amount of talk was going to convince them to retrieve their pants and blouses! 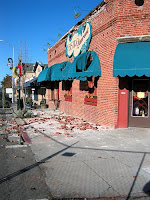 Dad and I tried using our cell phones to ring my Mom and Mike back at the house, but all the circuits were busy. We decided to hurry home, knowing that while we were gone, Mike was planning to be up on the roof, putting up Christmas lights, with Nathan's "help". We had no idea where the epicenter was, so we had good reason to worry. We sailed home, make the hour trip in about 40 minutes, only to find everyone lounging about. The hadn't felt it at all. Later the news showed the damage and we realized how fortunate my Dad and I were to have already left the area which was hit the worst. Thank goodness for short lines in rural DMV offices!

Today is also the 13 1/2 year anniversary of the day Michael and I were married. Our boys are so intense on whether they have reached their "half" birthdays yet, so I thought I'd toss that out there in their honor!
By Heather Rose-Chase at December 23, 2008

Email ThisBlogThis!Share to TwitterShare to FacebookShare to Pinterest
Labels: Anniversary