Today our friend Sherry married a boy she dated in high school and then lost touch with for about ten years, only to meet up with him again last year. The day she reconnected with him, she called to say she was coming over so we could meet the man she was going to marry. We

were shocked to say the least, as she has never so much as dated anyone in the five years we have known her! She asked me to be a bridesmaid, a role I did not especially relish as it meant donning a dreaded bridesmaid dress. We bought our dresses at the beginning of summer, and through an extremely stressful month of October I ate enough starchy comfort foods that the dress no longer fit when I tried it on two weeks before the wedding! Uh-oh! So I went on a strict regimen of very low carbs, lots of water, a morning and evening session of Pilates each day, and a daily walk or jog of two to five miles. I'm happy to report that the dress fit just fine with room to spare. 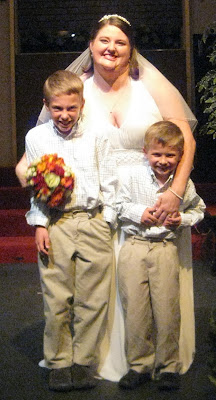 The boys were reluctant wedding guests. I imagine it's hard to sit still and watch a bunch of people on stage who are doing nothing other than standing there in pretty clothes, wiping away tears. Kudos to my husband who had to do all the parental duties while I was off doing bridesmaid duties! 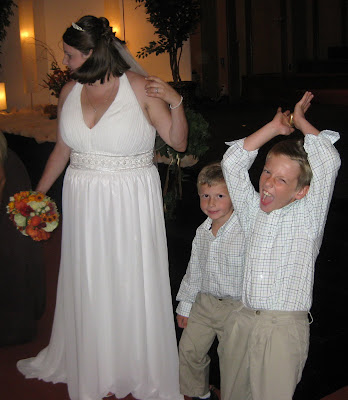 After the ceremony we walked outside to find falling ash from the many fires that are burning around the Los Angeles area. The sun was a fiery orange color, hazy through the layers of smoke. The nearest fire, just a few miles away in Palos Verdes, was quickly contained, but our friends in Orange County are not so lucky (incidentally where the Bride and Groom are spending their first night as Mr. and Mrs.) with the loss of many houses. 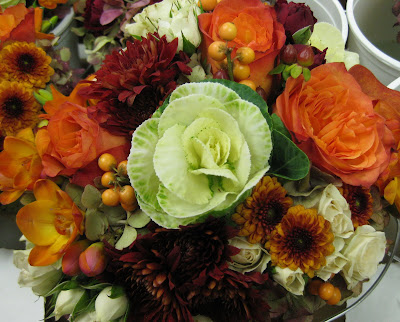 I caught a ride with another bridesmaid to the reception. We were taking the groom's car, and neither of us had ever seen the car. We knew it was a blue Ford SUV. Behind the church we found a blue Ford SUV which was unlocked. Thinking that this was the correct car, we began to load it with the garment bags, changes of clothes, and all sorts of other wedding related stuff. We noticed that the car was full of framed art and a huge stack of dry cleaning. We thought it was a little bit odd for the groom to have these items in his car considering it's his honeymoon night and all, but neither of us know him, so we just shrugged and started rearranging everything to make room for the wedding stuff. We got in the car, put on our seat belts and then tried to start it up... but the key wouldn't turn. We tried all the keys on the ring and none of them budged even a little bit. We jumped out of the SUV and walked around the church, only to find another blue Ford SUV that made that pleasant "beep" sound when we pressed the key fob! So we had to go back, unload the first SUV and try to put all the art and dry cleaning back in the way we found it and then load up the correct car. By this time, the entire bridal party had been at the reception location, waiting for us to arrive for about twenty minutes. I called the bride and said "car troubles" slowed us down and that we'd be there in a few. Poor hungry guests! For once it wasn't the photographer making everyone wait... 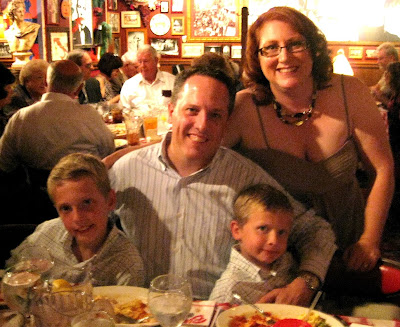 After the reception, we came home, changed clothes, and then took the boys to see Madagascar 2, thinking it would be cool and air conditioned instead of muggy and smokey like our house. I love Los Angeles, where it's 90 degrees in November! Hopefully tomorrow will bring cooler weather and the winds will die down so the fires can be put out. And as for our friend Sherry and her new husband Matthew, may the flames of their love continue to burn for a long, long time! 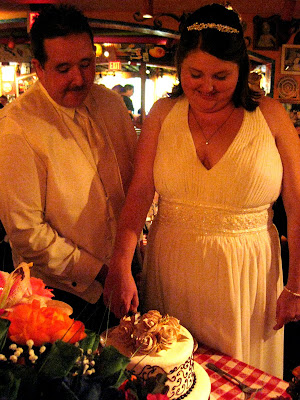