Michael's parents used to have the only fluorescent yellow house on the block, which was badly faded and peeling. They have gone round and round on what color to paint it, with the final two choices being a deep green and a deep grey. And then this weekend they ditched both of the final two choices and painted it this khaki greenish color, which we all love. 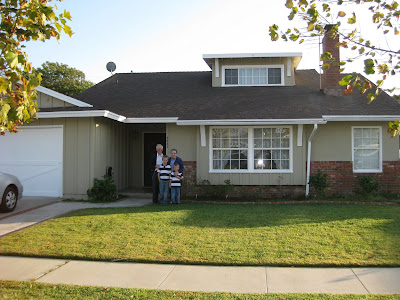 This is the house that Michael grew up in, which is right around the corner from where we live now. We also lived there for nine months after our return from Hong Kong, along with Michael's oldest sister Holly who moved in around the same time. It's an enormous house, with four bedrooms and two baths downstairs plus a large loft upstairs with it's own bathroom. We thought we'd only be there for a couple of weeks while Mike looked for a new job. Mike found a new job and then we started looking to buy a house. In the end we didn't, but we did find a rental right around the corner in this great neighborhood. One day we hope to actually buy a house, but with our track record of thirteen moves in thirteen years of marriage, it may not happen any time soon!

Email ThisBlogThis!Share to TwitterShare to FacebookShare to Pinterest
Labels: grandparents