In early September of 2001 we were still living in Japan but preparing to repatriate back to the US. Our return flight was scheduled to depart on September 11th, but when Michael's boss asked if anyone on the project wanted to return a week earlier, our homesickness for sourdough bread and the grandparents swelled and we enthusiastically said yes.

Homeless after our return, Michael, Nathan, and I were all staying in the loft above my in law's living room while we figured out what Mike's next career move would be. We were disoriented from jet lag, made worse due to 10 month old Nathan who could not be convinced to sleep when everyone else was desperately trying to sleep. That Tuesday morning Michael managed to shower but couldn't put one foot in front of the other to get out of the house and into the office where he was scheduled to work on closing documents on the Tokyo project. We were grumpily lounging on the bed playing the "I'm-more-tired-than-you" game when my father-in-law called up the stairs saying I had a phone call. Picking up the extension I found my Mom on the line in hysterics. I could not understand what she was saying because of the sobs. She kept asking if Michael was with me or if he was driving past LAX, repeatedly saying, "one is missing, they don't know where it is, what if it's in Los Angeles".

Not knowing what she was talking about, I was gripped with fear. I've only witnessed my mom cry once in my life. She is the toughest chick you will ever meet, owns (and operates) her own chainsaw, never panics, never frets, and lets nothing ruffle her feathers (at least not visibly). I knew that whatever it was that had her so worked up had to be nothing short of the end of the world. After asking her over and over again what she was talking about, she finally screamed "JUST TURN ON YOUR TV!" We ran downstairs and called Mike's parents to the living room where we were just in time to see, live, a plane flying directly into the World Trade Center.

The horror we felt defies description. The next few hours are a blur in my memory. I remember only that my tee shirt was soaked with tears that had streamed down my face unchecked, and that at some point Nathan finally fell asleep in the most uncomfortable position. He sat facing out on Mike's lap, with his little face resting on the palm of Daddy's hand. We snapped a photo which never fails to bring me to tears when I see it with the date Sep 11 2001 stamped in red on it. Our child, sleeping peacefully in the safety and protection of his father's arms while the world quite literally fell to pieces. 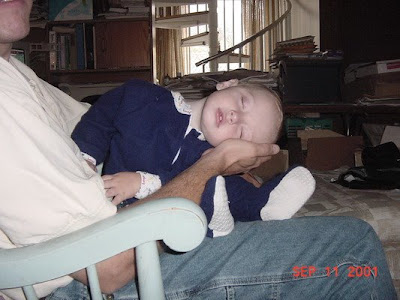 So much changed that day in the world. My own personal change was profound. On September 10, 2001 I believed that I had the power to protect my child from anything bad the world had to offer. On September 11, I knew otherwise.

How easy it would it be to cower in fear and close ourselves off from anything mildly threatening? But I think that instead of living in fear, Michael and I chose to go the other direction. We don't do anything that would obviously put our children in danger; we don't let them play ball in the street or run with scissors. But we do continue to move all over the world and travel to places most parents wouldn't take their young children. We send our kids to preschool and day camp where they are the only ones with blue eyes. We involve ourselves in the day to day operation of our local public elementary school where Nathan's first grade class had six different religions represented last year, while never far from our mind is the fact that 100% of our closest friends homeschool their children. We try to make bold and fearless choices with our own lives, knowing that what we show our kids is infinitely more important that what we tell them.

I may not be able to protect my kids from danger, but I can walk with them along side it and teach them how to be strong and courageous when it comes near. How to live by Faith and not by sight, so that it is still possible to fall asleep and rest peacefully in our Father's arms when the world is falling apart. I want to teach them it is okay to be afraid, but it's not okay to let fear dictate what we do with our lives. It's a tall order indeed, but I'm grateful that each year on this day I can take a moment to inventory how far we have come, and how far we still have to go.