Early this evening Ben threw a nuclear meltdown of a tantrum. I sent him to his room for five minutes to get himself under control. When I went to get him out, he was sound asleep. No way to wake him up.
This put a slight damper on my plans for the evening which included having two wide awake children, so instead I went to plan B, which was to order pizza and have it delivered.
Nathan and I had a picnic on the living room floor while Ben continued to saw logs. 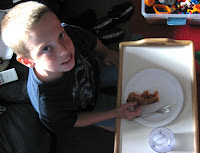 In other news, only two days until Daddy returns! Thank goodness for the Internet, web cams, and "all you can eat" international calling plans! What a difference from 2001 when Mike first started doing international business trips! Now we can talk to Daddy on the computer and see him while we hear his voice. The future of my childhood is now here! The only bad thing is the time difference, Michael is 15 hours ahead of us. Ben thinks his dad is in the future, which is incredibly cool to a five year old. I think it's hard getting up early in the morning so I can talk to my hubby before he goes to bed at night. He got to go to a fancy grand opening gala for a big show in Macau and we had to buy him a suit (which was an adventure all of it's own). I made Mike promise to take a photo of himself to send me. He's such a handsome fella. Fortunately I own a fancy dress that matches that tie, so we'll have to find something fancy to do wearing our dressy duds. 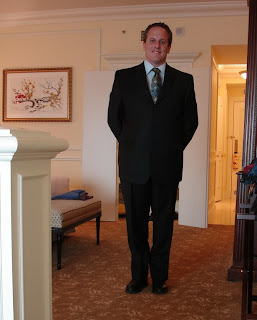