We've always realized that we have some quirky family traditions that we love. For example, we never, ever go to a fancy dining establishment on Valentine's Day. For the fifteen years I've known Michael, we have always happily gone for fish n' chips. Why? It's the one place that is EMPTY come February 14th! And it lacks all pretense... you can't be all lovey-dovey or try to look sexy with grease running down your wrists and vinegar breath. Plus, no one gives our kids dirty looks on a night when all other people book a babysitter. It's also true that this last year was the first that we've ever had Christmas stockings. Considering we don't really do Santa, it didn't seem all that important. But we always (and I mean always!) go out for ice cream when it rains (again, who would think to get ice cream when it's cold and wet outside?). But our favorite tradition generally takes place whenever we've had either a particularly terrible day, or a spectacularly brilliant one. It never happens on just a random Thursday. Anyone can call it, and both kids have had days when they were just miserable and unhappy and looked up through tears and said "I think tonight's the night". And it pretty much goes without saying that anytime Michael has been traveling out of town, we joyfully partake in this tradition the night of his return.
The tradition is going out for made-right-at-your-table guacamole. 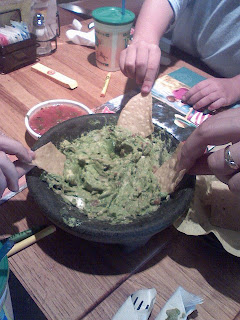 The kids don't even know the name of the restaurant, they just know it as Guacamole. You would probably know it as El Torito, which is a chain of Mexican restaurants throughout California, Arizona, and a lone location in Oregon. There is a location in Japan as well, and we made the 90 minute, four train change journey quite a few times the year we lived there. The food at El Torito is nothing spectacular (and yes, I have had spectacular Mexican food), but the guacamole is another story. They make it right there in front of you, exactly how you like it. Both the boys ate guacamole from the time they were in the womb (with Nathan it was literally all I could keep down during the entire miserable nine months of morning-noon-and-night sickness), and both were exposed to the wonder of the avocado as one of their first solid foods. We all L-O-V-E love-love-love it!

But even possibly more than the guacamole at our local El Torito, we love our waiter, Ernie. We only go on nights when he is working (he works days on Sunday and is off on Monday and Tuesday) and we've been known to wait up to forty minutes for a seat in his area when there were available seats elsewhere with other servers. Here is why we love him so: we walk through the door and he spies us and immediately sets up a table with two milks, one Coke, one iced tea, chips and salsa, and he's got all the fixings to begin preparation on our guacamole. He knows what we order, which rarely varies, and he brings free refills of milk for the boys (instead of charging for each one) and extra-large scoops of ice cream at the end of the meal because he knows we always steal bites from the kids. He has a son a year older than Nathan, and he is happily married. We give him an outrageous tip every Christmas (and a generous one the rest of the time). He is worth his weight in avocado, that is for sure.
But now we are faced with a problem!
Today Mike returned from a day of meetings in Las Vegas which wrapped up earlier than expected which meant he caught an earlier flight home in time for dinner, which means (you guessed it)... celebratory guacamole! We walked through the door of El Torito, and were immediately greeted by the cheerful manager who is accustomed to us praising her employee at each visit. She then told us that Ernie has had an operation on his foot and he will be out of commission for SIX WEEKS. We all took a moment of silence and let this sorrowful news sink in. I asked if we can give her a get well card that can be delivered to him and she assures us that it will. Then she tries to give us to another server, who immediately sees us and asks if we've heard the news about Ernie... I don't know if we should be embarrassed or tickled pink with pleasure that we are known so well. We have been going there cumulatively for just shy of four years, with a break in the middle when we lived in Hong Kong (where there is, indeed, a single spectacular Mexican restaurant that happens to be right in the middle of the red light district and not at all family friendly).
What will we do in Macau? Good thing we are big fans of Portuguese food, for which Macau is rightly known. But nothing can hold our hearts the way a California avocado can. The next six weeks will be sad and lonely. We'll have to come up with a new tradition for what to do when we have the No Ernie, No Guacamole Blues. Any ideas?
By Heather Rose-Chase at August 21, 2008